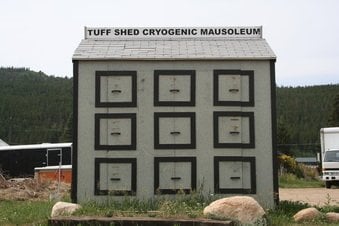 A little wild weather couldn’t keep the revelers at one of Colorado’s quirkiest festivals from enjoying themselves.

Although the more than 60 mph winds put a damper on most of the events at Nederland, Colorado’s Frozen Dead Guy Days on Saturday, festival-goers made sure to make up for it on Sunday.

Frozen Dead Guy Days is an annual celebration that honors Nederland’s resident frozen dead guy, Grandpa Bredo Morstoel. Grandpa Morstoel died in Norway from a heart condition in 1989, at 89 years old. After his death his son brought him to the United States from Norway in hopes of building a cryonics facility that never materialized

In 1993 his remains were moved one more time to Nederland, where he has since remained packed in dry ice in a TUFF SHED under the watch of his daughter Aud Morstoel and grandson Trygve Bauge.

After the Nederland Chamber of Commerce found out about Grandpa Morstoel’s remains, in 2001 they decided to embrace the local frozen dead guy and celebrate the man who had brought them worldwide publicity and throw a festival in his honor.

As for the TUFF SHED in which Grandpa Morstoel resides, although it might be one of the quirkiest uses for one of our buildings, TUFF SHED is happy to be a part of a celebration that brought a crowd of more than 15,000 to the town of Nederland this year to revel in all things frozen.

And although some of Saturday’s festivities were cancelled because of bitter cold and high speed winds that were toppling tents early in the morning, that didn’t slow down the party on Sunday, where those in attendance were able to partake in the annual Frozen Dead Guy Coffin Races, Polar Plunge and Turkey Bowling.

The festival, which started 11 years ago and unofficially celebrates the winding down of the snow season and the coming spring, went as usual, or perhaps as unusual, despite the unruly weather.